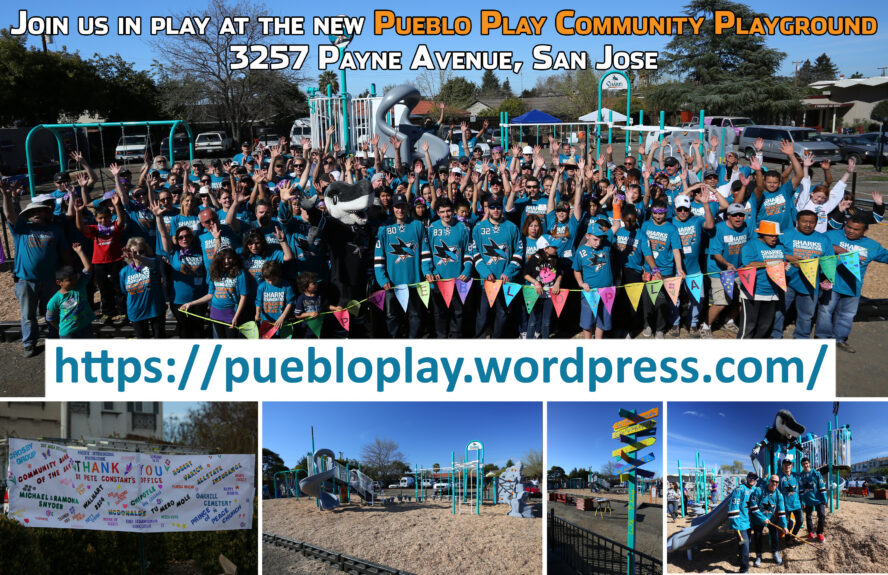 When the WNAC was restarted with expanded boundaries in 2014, the Agrihood and the Sharks’ playground were the community-led anchors. Thursday’s meeting (video, above) provided an update of WNAC’s activities and progress, including a brief update on the Agrihood and an interactive discussion of PRNS’s plan for the park at 3257 Payne (e.g., the home of the Sharks’ playground).

Regarding the I-280/Winchester VTA Environmental Review, which Kirk references at the beginning of the meeting, the WNAC submitted the comments at this link.

For more information on the new park, please go to: https://puebloplay.wordpress.com/

and for examples of letters supporting the continued use of the playground, please go to https://puebloplay.wordpress.com/category/community-event-2/letters-of-support/

25:16 – Q & A starts, Lloyd asks when his questions of the Council/PRNS will be answered.

27:46 – Maria V., who was one of the co-chairs of the playground build, points out that she lives in the Cadillac-Winchester neighborhood and was never noticed about the meetings. Additionally, she believes the preschool still has useful life.

31:30 – Daphna asks a couple of clarifying questions. She points out that equity is an important driver in collecting input. She asks if the survey can be put in Spanish (Done and is at this link). She points out the challenges of making sure that people know about the park. She warns that not everyone will be able to get everything.

37:34 – Ken puts a link to the Spanish version of the Community Services versus Community Center video. He explains that when the original playground was built that he and Maria and many other volunteers handed out flyers.

42:20 – Maria suggests that it should be possible to use the Sharks playground as a foundation to build something better. She points out the importance of building something by the community. She suggests that a community center targeted to real needs could be useful. We have to be careful with the types

45:54 – Daphna recommends that the community needs to come together. Ken respectively disagrees and suggests that, if the community isn’t together, it is because of the poor process. He points out that a $30M Community Center is not consistent with the definition of a Neighborhood Park (which this one is), as the catchment area would be too small to serve such a large building.

51:44 – What neighborhoods were involved? All the PRNS meetings were held in conjunction with the Cadillac Winchester Neighborhood Association. There was a meeting between Eden and Vice Mayor Jones. The WNAC hosted placemaking on July 8th, 2017 and October 19th, 2019.

53:50 – Takeaways – Lloyd points out that the process of notification was lacking in the January 31st, 2020 meeting. Kirk asks if it would make sense to create more material to help influence the Parks Commissioners between now and the vote of the Council on the 27th.

01:01:02 – Ken explains the background of the meeting. Daphna recommends that we reach out to PRNS.

01:05:10 – Ramona points out that the best thing now is to get the council to vote down the proposal.

01:06:40 – Chris suggests that the community engagement process needs to be fixed. Kirk suggests we focus on getting the word out.

A couple of comments from the chat:

Yareli – “i agree with Ken Pyle to leave the park. It Would be better to build a community center where the preschool is.”

“Council Policy on PRNS Outreach is very old and does not require them to notify people beyond advertising a community meeting with the help of Council District office. The policy needs to be updated. Parks’ policy is different from the Planning policy. Planning is better than parks”

Jhonan “Would you have both communities to discuss and agree on something. It would also help with bringing this to the commission.”