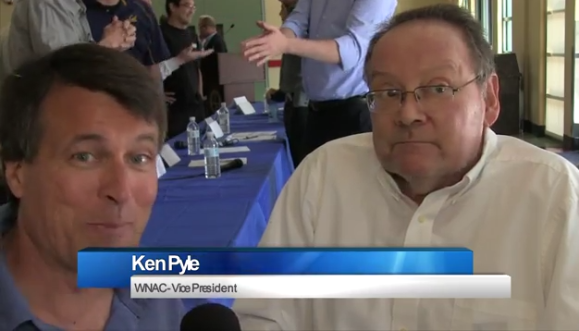 For a quarter century Gary Richards, aka Mr. Roadshow, has informed and entertained readers of The Mercury News about the challenges of moving around in the nation’s fifth largest metropolis. On Saturday August 20th, 2016, his readers had the chance to see him, as well as a cadre of experts from public agencies and private companies discuss the present and future of transportation on a panel at the 1st Annual Transportation Forum. In the above interview, he provides a few of this thoughts on this morning-long event at Archbishop Mitty High School.

In addition to the panel, the event included presentation of the D1 Mobility Challenge Award, presentations by Shireen Santosham,  Chief Innovation Officer, Office of Mayor Sam Liccardo, City of San Jose and Sarah Syed, Principal and Founder of Sage Vista and opening comments from the event’s sponsors, Councilmember Chappie Jones and  State Senator Jim Beall.  There were a number of table top displays with everything from parking lot inventory technology (TransForm) to PodCars (CyberTran).

With a glimpse of how interactions between local government and its citizens can become much more responsive and far-reaching, the event featured a text message-based polling system that allowed the 200+ audience to answer questions and give instant mini-survey results. Granted, the results from the polling were probably skewed in that they were biased towards an audience that had a keen interest in transportation and had a demographic that didn’t necessarily reflect the broader community.

Still, the results hint at what can be done with new approaches, such as what was advocated by Syed, as she described Owlize, which uses virtual reality technology to provide anyone a 24 hour a day opportunity to give feedback on a proposed development using either a smart phone or a viewing kiosk that is reminiscent of the public binoculars often found at airports or national monuments.

A few take-aways from this 2.5 hour conference:

Stay tuned for more videos from this event, as well as future presentations at WNAC meetings, where we continue to explore the rapidly changing intersection of land-use and transportation.

[A special thank you for Christina Pressman of Councilmember Jones’ office for her work in organizing this forum and for finding a slot in the agenda to display the WNAC video on the idea of reuniting the north and south sides of 280 with a “cap”.]

Put a Lid On It! Let’s Reunite the Neighborhoods on Both Sides of I-280!