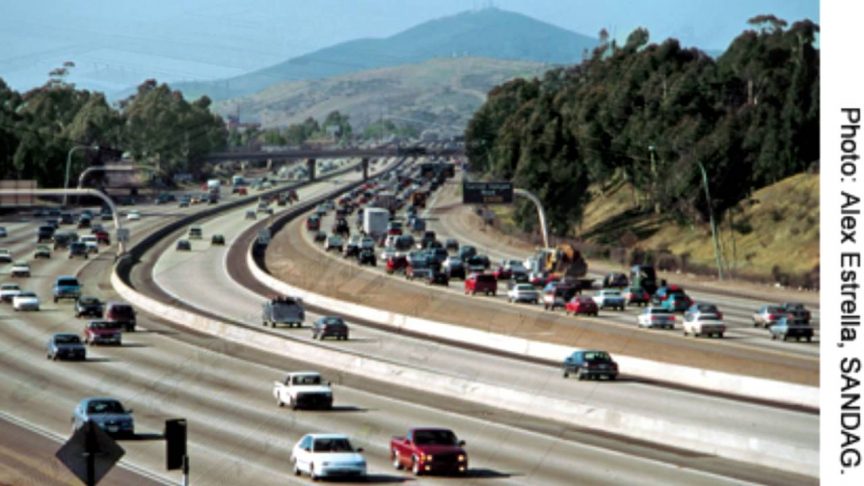 [Overview: What follows is a long-term proposal – think a build out of a 100 years – to use existing rights-of-way to improve mobility and the quality of life in Santa Clara County. Just like the way we live today isn’t the same as it was 50 or 100 years ago, how we live in the ensuing decades will change. This county needs a mobility infrastructure that can adapt to economic and environmental changes, while improving use of existing and new land. Implementing what is proposed will take political leadership with a long-term outlook. So, let’s use our existing rights-of-ways to create mobility threads that will stitch together Santa Clara County into a united federation of livable and walkable communities.]

With 75% of jobs reportedly with 1/2 mile from a freeway, why isn’t Santa Clara County at least investigating the use of these stoplight-free corridors as routes for Bus Rapid Transit and other shared vehicles?

This may seem like a far-fetched idea, but San Diego undertook a $1.4B program that created a “freeway within a freeway”, providing a high-speed corridor for buses, shared cars and single occupancy vehicles willing to pay a toll. Their bus system, “The Rapid operates like a ‘train on wheels,‘which means limited stops and reliable trip times on the Express Lanes. Direct Access Ramps (DARs) connect new and recently upgraded transit stations, and their Park & Ride lots, to the Express Lanes.”

This post will look at the idea of how Silicon Valley could take San Diego’s idea improve it through the creation of a Bus Rapid Transit network and associated mixed-use transit centers in Santa Clara County’s freeway and expressway corridors.

With funding spearheaded by a 2004 voter-approved, local 1/2 cent, 40 year sales tax, the I-15 express lane corridor is a 20-mile, 4-lane, freeway-within-a middle-of-a-freeway, that is open to multiple modes of transport, including bus and cars. Carpools and certain clean-air vehicles are free, while single occupancy vehicles pay for access. A movable median barrier allows the number of lanes to be expanded to three in one direction during peak time.

The MTS, the agency which runs the public transit system in San Diego County, explains on their website that they evaluated building a rail system along the I-15 corridor in the early 1990s, but, in the end, a bus rapid transit was their choice as it provided the same benefits, while allowing other types of vehicles:

A key element of their transit plan are the transit stations that are strategically located at intersections where there are connections to last-mile transit. These stations include a generous amount of parking, allowing people who are beyond the last-mile to ditch their car and get the benefit of shared express transit. They also improved the bus experience through design features, such as “comfortable seating and larger windows improve ride quality, while features such as multiple doors, low-floor designs for easier boarding,”

Another key element to moving more people is the inclusion of a 2.2. mile long, 12-foot wide, two-way bike lane on a portion of I-15. This $14 million, well lighted route is physically separate from the freeway traffic and provides riders with a safer biking alternative than traversing street traffic. This $14 million project has an expected completion date towards the end of 2017.

Silicon Valley Could Do It Better

An idea for capping 280 with mixed Use.

Santa Clara County should look at a similar network of Bus Feeder routes using existing freeway and expressway rights-of-way. Elements of this approach were touched upon in an earlier article, A Transition Step(s) to an Autonomous Transport Future. With the advantage of starting later, as compared to San Diego, Silicon Valley has the opportunity to bring several innovations that will create an even more efficient way of transporting people.

The fundamental difference with San Diego’s effort is the creation of mixed-use transit centers that would include, as possible, high-density affordable and market-rate housing, commercial and retail spaces.  Like San Diego, park and ride would be included, as well as easy transfer to last-mile solutions, like shuttles, bike-share and ride-share.  Of course, by building housing at freeway interchanges, it could actually reduce vehicle miles traveled as more people would be at locations that are within 1/2 mile of their jobs.

A key part of the financing for this sort of effort would have to come from public-private partnerships, similar to what Hong Kong’s transit authority has done to develop high density near transit stations. Providing incentives to developers to build on these platforms (e.g., express permitting for pre-approved construction techniques, reduced/no parking requirements, etc.) would be necessary to expedite build-outs.  These wouldn’t be subsidies as much as creating a cookie-cutter process.

Added 9/22/16 – The Port Authority of New York and New Jersey provides another example of a public agency using its air-rights and rights-of-way to encourage development. Relevant to this article, they just released the results of a design competition for a new bus terminal that is estimated to cost between $3.7 to $15.3 billion. All the proposals envision mixed-use and some combination of open space (one featuring a 9.8 acre park) to help offset costs.

A video showing the idea of capping freeways. It’s being done worldwide.

By building relatively high-density clusters, the need to build high-density into suburban neighborhoods wouldn’t be as necessary; creating a buffer between traditional single family homes and multi-story housing.  At the same time, the suburban neighborhoods would have additional transit options, thanks to the relative close proximity of high-speed express lanes and transit centers on existing exchanges.

As an exercise, one stretch of I-280, from Highway 85 to I-680 was examined to look at the possibility of creating platforms over the existing freeway. This isn’t necessarily the most job-rich area of Santa Clara County, but given that the VTA is studying this corridor, it seemed appropriate.

Ten major intersections were identified as possible urban center/transit areas, which translates to about a station on average every 1.2 miles over this 12 mile route. Some other important statistics. The route stops at I-85, although it is expected that express buses might continue through the largely residential, rural and wealthy hills to the job-rich area in the Page Mill/Caltrain area of Palo Alto.

Some other ways Silicon Valley could make this distinctive include:

Economics and Next Steps

Bus Rapid Transit via a separated lane on an Expressway in Sao Paolo, Brazil

Given a scope that is similar to what San Diego built with its 20-mile stretch, it isn’t unreasonable to think that a 12-mile stretch could be built for approximately $1.4 B. It is assumed that the extra costs associated with building developments above the larger platforms envisioned in this approach, would be borne by private developers building commercial, retail and residential spaces.

The question of how air-rights would be distributed and valued is one for further exploration. For instance, perhaps it would be a model similar to the Homestead Act, whereby an entity would be given a certain time to develop after being given air rights. That development might include the requirement to build a platform that could be used for the transit center. Or, the air rights might be auctioned off in some manner.

From an operational standpoint, a simple analysis suggests an investment of approximately $50 M for enough $1.5 M electric buses to provide a commute time of approximately 30 minutes over the 12 mile stretch of 280 between 101 and 85 at peak-hour.  This is with a frequency of less than 1 minute. Of course, what this implies is that the buses might actually form mini-platoons depending upon peak-hour conditions (e.g. multiple 42 passenger buses would form virtual trains to fulfill capacity needs).  Similarly, with platooning technology, it could be possible to eliminate drivers from some of the buses, creating virtual trains during peak hours.

Image courtesy of Next Future Transport

With autonomy, the prospect of driverless pods could become reality. This Silicon Valley start-up, Next Future Transportation, is developing a software defined transportation network consisting of self-driving, electric, wheeled pods that form virtual trains to increase throughput. Unlike trains on wheels, these pods are independent of each other and dynamically connect to and disconnect from each other while in motion. This type of solution fits in perfectly with the approach described herein.]

At 1/3 the projected cost of a 4.2 mile extension of BART and with much less disruption to existing businesses and residences, VTA should examine an approach that enables high-speed vehicle transit on the existing freeway and expressways  corridors. This holistic path would represent a significant investment and would take decades to implement, but it would build on the existing rights-of-way and traffic-use/land-use patterns as well as provide a path to incorporate evolving technology, such as autonomy. Ultimately, this should prove to be lower risk and lower-cost than as compared to alternatives that require new, expensive rights-of-way.