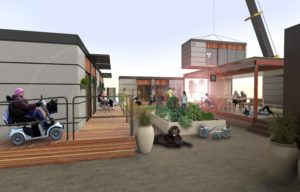 Great ideas, Diane H (see questions above). I believe the Housing Trust SV is trying to simplify the process and be the one-stop shop/portal you suggest is necessary in your question. Having said that, here are some of the resources the WNAC has tracked on ADUs

Regarding your thoughts about creating mini-ADU communities within existing neighborhoods, I think that is a great idea and consistent with the type of suggestions that were made at the Teachers Village & More Forum as an opportunity to create more mid-density housing that would be relatively affordable (see here https://winchesternac.com/2018/06/02/what-about-adding-teachers-housing-to-dicks-center/).

A better example, again from Arizona, is the Newtown Community Development Corporation Community Land Trust and their Tempe Micro Estates proposal. They are planning 13 each, 600 square foot homes on a 0.57-acre plot of land in a single-family neighborhood of Tempe, Arizona. They are effectively subdividing the land, so each home has its own plot, including a small yard, along with a common area for a community garden, community room, and a shared parking lot (one parking space per home). Their stated goal is as follows:

“These homes are designed for maximum flexibility, allowing for affordable, high-quality housing for artists, healthcare, restaurant, and service workers who are on the low- to moderate-income scale. Targeting people who may work in Tempe but who otherwise cannot afford to purchase a home here. Our goal is to balance the pros and cons of traditional tiny-home developments with the current demand we’re seeing from our clients.”

My only criticism is that there is too much land devoted to parking and that there might be an opportunity to unbundle parking and offer alternatives to traditional car ownership [a great primer on parking and the question of whether the costs of building for cars versus people is provided in this infograph by BetterParking101 (PDF)].

That said, could something like the Tempe project work here? I believe the answer is yes, assuming appropriate policy changes that would allow this sort of upzoning. Assuming the policy changes, the simple math is:

An elderly person could potentially redevelop her home into a multiple unit, tiny home community. This would allow her to live in one of the new units and generate cash-flow that would allow her to comfortably stay in the same neighborhood, where she raised her kids. More importantly, she would have the companionship of nearby neighbors.
The above numbers are still expensive, but much cheaper than the typical Silicon Valley domicile. Plus, the density could help actually create neighborhoods, instead of walled-off castles where cars and their associated garages isolate neighbors from each other.

Some of the zoning issues that would need addressing and principles for addressing those issues, include:

But the above idea, if it is to happen anywhere in the Bay Area, will require a fundamental change in mindset about housing. This sort of development would slowly change the face of neighborhoods; but that is already happening, as old post-World War II homes are replaced by so-called monster homes. Unlike monster homes, tiny homes provide the opportunity to redesign neighborhoods around humans, instead of the automobile. If done right, the neighborhoods should become more walkable and become better communities.